Leadership Is Being & Doing 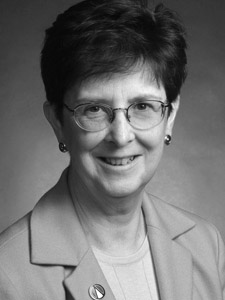 Long before Nike trademarked its infamous three-word phrase, Sister Maureen Comer was already figuring out how to "Just Do It!"

When Sister Maureen Comer, OP, transitioned into the CEO role at St. Rose de Lima Hospital in Henderson, Nevada, she was the youngest person on the management team. “I hadn’t really given any thought to whether I was capable,” she says. “I had the backing of my religious community, the Adrian Dominicans, and I figured if they thought I could do it, then surely I could.”

It was a lesson she learned all the way back in 3rd grade when she was given a project to complete. “When Sister gave me the assignment, I remember thinking to myself that it was impossible… it was too hard and I just couldn’t do it,” she recalls. She then stopped to realize that a lot of other kids before her had completed the project, and if they could do it, she could too. “That is where I developed my philosophy of ‘Just Do It!'”

Read on to learn how leaders today – whether seasoned or up-and-coming – will often find that some things aren’t as hard as they seem, and, some things are harder than they seem. Comer says that the challenge is just making the decision that you can do it, finding someone to help and then getting it done!

REALM: At what point in your lifetime did you first become someone’s boss?

MC: It was after I finished my graduate work and went to work at our hospital in Nevada. I was 30 at the time and was appointed the associate administrator, and then the next year, I was promoted to Administrator/CEO.

REALM: Coming right out of school, did you feel prepared for that role?

MC: I was asked to be involved in this ministry, and if your religious community asks you, you just do it. I often thought to myself “how could I be 31 and the CEO of a hospital?” In that era, we also had an opportunity to have sisters who were more experienced serving as “coaches and mentors.”

I could pick up a phone and call several of our sisters and ask, “What do I do about this situation or is this a good idea?” Or, it could have been a situation where something needed to be done at the facility and it wasn’t my area of expertise, but there was an Adrian Dominican sister somewhere in the country that did, and I could call her up and ask for help and guidance.

REALM: In that first role as Associate Administrator at St. Rose de Lima Hospital in Henderson, NV, how many people were you supervising?

MC: Probably about six or seven people. I was in that role just shy of one year before becoming the Administrator.

REALM: Had the Administrator been another Adrian Dominican?

MC: Yes, it was a planned transition. She had been there for quite some time and she wanted to move on. I had been working at the hospital briefly and, then, was asked get my master’s degree. I left, knowing that when I returned after earning my degree, that I would be transitioning into the CEO role.

REALM: How did your coaching and mentoring system work?

MC: It wasn’t a formal structure; however it was just the way we did things in our community. Part of the reality back then was that sisters were sent out to do things when they were very young. They were sent to teach before they even turned twenty, and were almost always put in a situation with other sisters who had been teaching – and who were good teachers. One of the things that was always important for Adrians was education – and learning how to do things from the more accomplished and mature in the field.

REALM: Did you get to choose healthcare as your area of interest?

MC: No, I was originally asked to study business. Most everyone was a teacher, so I assumed I would be a teacher. However, we started to realize that even though we had been administering things for many years (facilities and sponsored works), we had not actually educated our women in the business aspects of administration. They just did it.

We decided that we should have sisters that were educated in the business aspect of administration, so many studied to be principals, educational administrators, and college/university presidents. I was actually the first sister asked to study business administration.

Once I got my degree, they didn’t know what to do with me because at 24, I was too young to run an institution. So I returned to the mother house to work for a few years. While I was there, a position became open in the business office at our hospital in Nevada, and that is how I got into health administration. I then went on to get my Master’s in Hospital Administration.

REALM: Any learnings from those early days that you still use today?

MC: When I first got to the hospital, there were financial challenges. We engaged early on in a strategic planning process to better understand our reality and to see what we might do to address it. I learned that even though you’re small, there are things you can do. You just have to think about it, and involve people in the process. It was important to take the work we had done and look at it every six months and ask, “What have we accomplished and what do we still need to accomplish?”

REALM: As you look back, who are some of those memorable people who helped mentor and coach you?

MC: One in particular was the sister who preceded me in the CEO role – she had been in healthcare since 1941. When she entered the Congregation, she had just finished nursing school. She was always available if I needed to call her or reach out to her with questions or help.

Even today, when I think about helping people, I realize that sometimes you can over-help. Sometimes you just need to let people do it and if they need your help they will ask for it. I try to be aware of what is going on, but I need to watch and wait to see what resources are needed. That is basically how I see the role of leadership – identify needs and find the resources to meet the needs.

One of my favorite quotes says, “Good leadership is really dealing with all kinds of things, but in the end, people need to feel that they’ve done it themselves. That’s good leadership. They don’t need to know what you’ve done to make sure they are successful.”

REALM: What are some of the lessons you learned from less than stellar leaders?

MC: One thing is to try and not let your own ego get in the way of success and really work hard at realizing who is contributing to that success. I think leaders that do not appreciate people (i.e. support staff) are off-base as these are the individuals who are going to make the organization and you successful. Appreciate and respect them and use the gifts that they have to make it happen.

REALM: How would you describe your management style today?

MC: I try to encourage people to always be learning. You can’t always rely on what you thought you knew from a previous time.

REALM: How do you go about hiring?

MC: When a person leaves – even when they are a great person who will be missed – it is an opportunity to take a fresh look at the needs of the organization and the gifts needed to support the mission. It is rare that you replace the person with someone just like them. That doesn’t mean the person who left did not make a significant contribution; it just means that the needs may have changed.

REALM: What do you do to continue and grow the culture at Lourdes?

MC: There are multiple dimensions to culture. We have a strong identity of doing things well. We have a great reputation and a gorgeous physical environment – with the lake, flowers, trees and trails. We have an environment that is easy to go to work to, and one of the challenges is that sometimes there have been practices over the years that have been in place that are, by today’s standards, not attuned to today’s needs. There is a struggle in our culture to realize that while it may have worked fine in another era/day, it doesn’t work anymore.

REALM: How do you ingrain the mission throughout the organization?

MC: I am a believer that you have to not only speak the mission, but you also have to have subtle approaches to it. We have a mission orientation for new employees, and we have other things that are not as blatant. The mission has to be communicated subtly, consistently and constantly because people forget.

Also, our people represent a variety of faiths, and even if they aren’t Catholic, they appreciate that we are honoring our faith. It sends a message that they can trust us because we ‘walk the talk,’ and we live out what our life means without being overbearing. We try to encourage people to have whatever experience they need for their spiritual life.

REALM: What would be your best career advice for young adults graduating from college?

MC: One of the things I appreciate about working with younger people is that they’ve got new ideas. While they still have a lot of learning to do, they can also bring new ideas to give to those of us who have been here for awhile. It is important to keep looking for what excites you, and continually ask questions.

Networking is also critical – and that means learning from other people and being open to helping people in any way that you can. With so many of today’s youth living in the “virtual” world, I worry that they will not appreciate the importance of building relationships that involve the real human person and not just what you read on a screen or hear on a phone. You have to have that face-to- face experience in order to get to know one another and form strong relationships. From that, one learns and grows.