Don't Wait for Permission to Lead 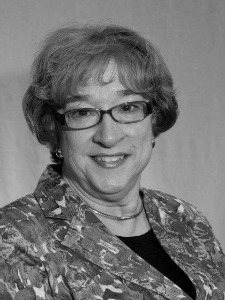 Many think that people come into this world with a natural-born capacity to lead. Carolyn Puccio, a Sister of St. Joseph of Carondelet, believes that although people may be born with some leadership skills, support and encouragement at an early age can make all the difference.

When Sister Carolyn was in her thirties, she uncovered her kindergarten report card. She proudly read the handwritten note by her teacher: “Carolyn has strong leadership qualities” and quickly learned from her mother that it was just a “polite” way to describe bossy little girls who were always more interested in taking care of everyone else and making sure their classmates were keeping on task.

It would seem that leadership came somewhat naturally for Carolyn at a very early age, and she was also taught that if you want something to happen, you have to take the initiative. “It was just expected in our family,” she says. She continued to grow her leadership skills, particularly at her all-girls Catholic high school. “It was pretty easy to be a big fish in a small stream,” she recalls. “I rose to all kinds of leadership roles in that setting and the opportunities continued when I entered the convent at age seventeen.”

Sister Carolyn’s first five years in teaching prepared and trained her for practically every position she has taken on. She even went on to acquire two Master’s degrees – one in Religious Education that would prepare her for her many years of ministry in rural Minnesota, working with volunteers and motivating people to be a part of something greater than themselves. And much later, just as she was settling into her sabbatical, God again nudged her in a new direction – to become the development/fundraising director for an innovative senior community, Carondelet Village, a shared ministry of the Sisters of St. Joseph and Presbyterian Homes and Services.

REALM: As your leadership style has evolved, how would you describe it today?

CP: I think my style is probably more collaborative than it once was. I have been fortunate enough to work on teams in parishes where people believed in collaboration and cooperation. I think I have grown in my dedication to collaboration and probably also in my skills in that direction.

REALM: When you look back, what were some of the most important leadership lessons you’ve learned?

CP: The leaders I experienced that were most effective were people who had done their homework, whether they did it themselves or surrounded themselves with good, smart people. I see that as one of the most important qualities of a good leader. Listening is also important, and as tedious as it can be, it is absolutely essential. The older I get, the more I understand that I have something to contribute, but I also realize I don’t have all the answers. I may have some of the answers as well as some very valuable insights to offer, but I don’t have all the answers, and perhaps don’t even know the right questions.

REALM: What were some of the things you learned from less than stellar leaders?

CP: I learned that people resent bullies and you can get more done with honey, rather than with vinegar. If you treat people fairly and sincerely affirm their gifts and abilities, you will build trust, as well as motivate people to buy into the goal or vision. I am a good motivator, but I also have to be careful not to manipulate people. There is a fine line and it is so important to be aware of that.

REALM: When you were in rural parishes, were you called upon differently as a leader? Were there different things you had to do because they were smaller in size, etc?

CP: Absolutely. I spent thirty-nine years in the rural area and it really was a great blessing in my life. It’s that same “big fish in a small stream” scenario and I put into practice what I learned in my family – if there is a need and you recognize it, you need to figure out how to respond.

I was also a “general practitioner” in every sense of the word and I loved that. I loved being called upon and being stretched, and also working collaboratively not just in the parish, but out in the community. At that time, most of the church leaders were male, and if anyone wanted a female perspective on things, they came to me. I would listen and support them and then eventually, I would refer them to a “real” counselor after I had done all I could do, but they didn’t want to start over. I decided then I needed to pursue a counseling degree.

REALM: Talk a little bit about your transition from ministry to elected leadership and what did that mean for you? What kind of personal transformation and work did you have to do?

CP: Prior to being selected, I said “no” twice (the second time I had just taken a new job and it wouldn’t have been fair to leave). The third time, people were asking me to really think about it and I knew I needed to take it seriously. I made a commitment to stay in the discernment process, but figured it would never happen because I had been out in the rural area for quite some time, not involved in a lot of the work of the province and I figured people just didn’t know me.

Out of courtesy, I told my boss what I was doing, but I assured her that it would never happen. As people started dropping out, I was still sure it wouldn’t happen. I was very honest in my presentation to the province and said, “I don’t really need this on my resume. It’s not something I really need to do, but many of you asked me to consider it and I wanted to honor that. I am perfectly fine and very happy where I am.” It turns out they thought it was refreshing that I hadn’t been involved in things, and didn’t have a hidden agenda and I was one of the three that surfaced from the discernment. In the end, I had to leave everything and everybody that I knew.

REALM: How did the team come together?

CP: We had a very good facilitator and we were the right team at the right time. We were able to accomplish some wonderful things for the province. We also had a great council. When it came to choosing the council, we asked for suggestions from the community. We decided that rather than choosing people with diverse perspectives, we should find people who had the same sense of church, community, and needs of society. It was a very wise thing to do. We had plenty of diversity, but we didn’t have to spend all that energy somehow mediating those differences.

REALM: Has it been customary for previous teams to use an outside facilitator?

CP: Yes… most teams have. I know our congregational team has always had one or two facilitators. It just makes sense. Plus, we surrounded ourselves with good people and really used our council.

REALM: As a team, how did the three of you bring the agenda of the province to life?

CP: From the very beginning, in our first conversations with our province, we committed ourselves to total transparency and collaboration. Because we wanted to be held accountable, we did a mid-term evaluation to find out whether that is how we were operating and we were pleased that people saw us in that light.

We kept the province informed and I think we were able to create a sense that we were all in this together and that we would not move forward until there was at least a critical mass that could support the direction. Our province had created a five-year plan and we were committed to implementing it.

REALM: How did you work with the sisters who were resisting change or thought it was happening too fast?

CP: We did not have a lot of unhappy people, and I think that was because we kept them informed and we presented the reasons for what was going to happen. One of my responsibilities was the Sisters at Bethany (retired sisters’ residence), so when Carondelet Village began to develop, I had my hands full. Sometimes, I would say to them, “The rest of the province hasn’t heard this yet…” and all of a sudden they would turn up their hearing aids.

So in fun ways, I let them be “in the know” and kept saying to them, “We’re not finished with you yet, just because you are living at Bethany. You still need to teach us… you are the ones who know how to navigate change. We’re counting on you to show us how to do this because you have been through tremendous change before and you will also be the ones most impacted by the experience of building and then moving into Carondelet Village.” And I believe they rose to that challenge. They were wonderful.

REALM: What is your advice for emerging religious leaders?

REALM: Looking back, what three things would you do differently?

CP: I would have trusted myself a little bit more. I think the biggest thing for me on the team (me being a Three on the Enneagram working with two Eights) was the fact that initially, I lost my confidence and it took me a long time to find my voice. One thing I wouldn’t do differently; I made a promise that I would always acknowledge people – whether it was a sister, staff member or associate. I told myself, “If I don’t have time to acknowledge that they are there, I really am too busy.” I realize better now, that maturity in leadership is also knowing when to say “no” and having the courage to do it; maybe that is another lesson I learned.